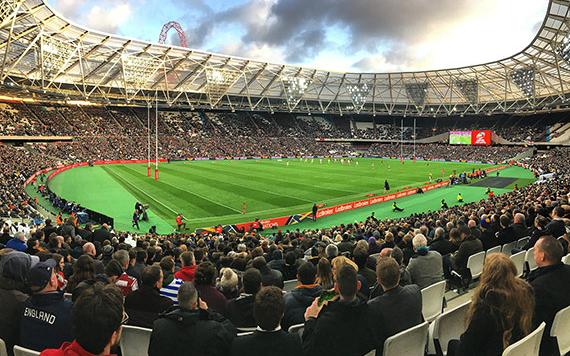 England forward Michael Cooper has praised the support of the England fans at London Stadium as his side succumbed to Australiaâ€™s strength in the final group-stage fixture in this autumnâ€™s Four Nations.

Having enjoyed a three-season stint in the NRL, Cooper made his Wolves return and hopes to use London Stadium as a fortress for Rugby League in London, and grow the sport in the region.

â€œIt was a great turnout and itâ€™s always great to play in London, weâ€™re proud to play in our capital, and itâ€™d be nice to play here more often,â€ he said.

â€œWe play in these first class facilities, we were here last year, this year and hopefully weâ€™ll get the chance to play here again.

â€œWe enjoy playing here, the pitch is good, the support is excellent and the facilities are world class.

â€œThere was great support, and itâ€™d be great to pinch a few Rugby Union supporters and convert them to league.â€

England were ultimately outclassed by their rivals in a second half blitz which saw Australia seal a 36-18 win at Queen Elizabeth Olympic Park.

Cooper insisted that while the Kangaroos flexed their muscles, they should also look inwardly to improve their performances, with the 2021 World Cup already on the horizon.

â€œYou give them bit of credit but we beat ourselves. We let the into the game when we were pretty comfortable at one point, and it cost us,â€ he said.

â€œWeâ€™ve already spoken about the improvements weâ€™re going to have to make, individually weâ€™ll go back to our clubs now, whether thatâ€™s in Australia or here in the Super league.

â€œThen weâ€™ll come together again in January we have a mid-season test and weâ€™ll take it from there.â€