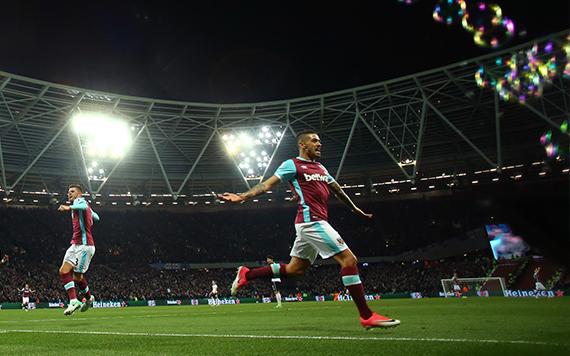 London Stadium once again set the stage for the talents of Manuel Lanzini on Friday night, as the midfielderâ€™s derby-day goal-scoring record continued with the decisive strike that saw West Ham United beat Tottenham Hotspur.

The Argentineâ€™s strike was the only goal of the game as the Hammers edged out their London Rivals at the Queen Elizabeth Olympic Park venue, backed by a capacity crowd and the loudest atmosphere of the season.

The win ended a run of nine straight victories for Tottenham Hotspur, and in doing so all but dashed their hopes of surpassing Chelsea for the Premier League title.

â€œIt was amazing. Itâ€™s very important for us, so Iâ€™m so pleased to score such a goal like this,â€ said Lanzini.

â€œI like playing against Tottenham and scoring against them. It was amazing tonight and the team played very well.

â€œMore important for me is not the goal though, itâ€™s that the team played very well. Tottenham are one of the best teams in the Premier League and to win is very important for us and for us to keep going.â€

The win sealed West Hamâ€™s Premier League status, as well as briefly moving them into the top half of the table. Lanzini reiterated the importance of the victory on the teamâ€™s confidence going into their final home fixture of the campaign this Sunday, and praised the impact of the London Stadium atmosphere.

â€œItâ€™s a great win for the manager who is a great coach, and he talked with us a great deal before the game. He is amazing.

â€œThe fans also were amazing and they are always like this. They are singing all of the time and they were perfect tonight as they always are.â€