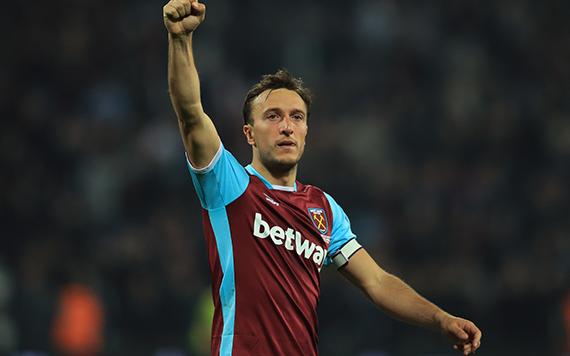 It was a night to remember under the lights at London Stadium on Friday, as West Ham United recorded a win over rivals and title-challengers Tottenham Hotspur. Lifelong Hammers fan and team captain Mark Noble knows just how much victory means to the Club in this fixture.

"I'm spechless really. The boys were fantastic - it was a great performance from every one of us. We needed to be at 100 per cent and we were,â€ he said.

The fixture fell just a few days prior to Nobleâ€™s birthday, giving him double the reason to celebrate. But the skipper felt the team as a whole needed the lift more than ever.

"It's great for the manager and for the fans. We deserved it, we played so well,â€ added Noble.

â€œWe had a couple of chances early doors and it was just a really good team performance. We know we can play like that, but it's been a tough season and the boys have dug in fantastically."

Noble praised the atmosphere generated by the sold-out Stadium crowd on Friday, helping the team to a win which pushed them into the top half of the Premier League table.

"The atmosphere on Friday was unreal, and we've beaten Spurs at home which puts us safe,â€ he said.

â€œI don't like saying the word safe because it actually puts us in the top half of the table. If we win next week we could finish one or two places below where we finished last year.

"Getting that kind of result against Tottenham makes it even more special. We should have beaten them at their place. Two goals in two minutes at the end really hurt.Â

The captain was back in the starting line-up as the two sides kicked off to the roar of a sell-out crowd. The West Ham captain added that he felt the noise generated throughout the game was testament to the fansâ€™ comfort in their new surroundings on Queen Elizabeth Olympic Park.

"The last two games I've played here, especially, against Swansea and Tottenham, have really started to feel like home,â€ he said.

"I couldn't have asked for a better outcome than Friday, coming back into the starting line-up for a game like that."