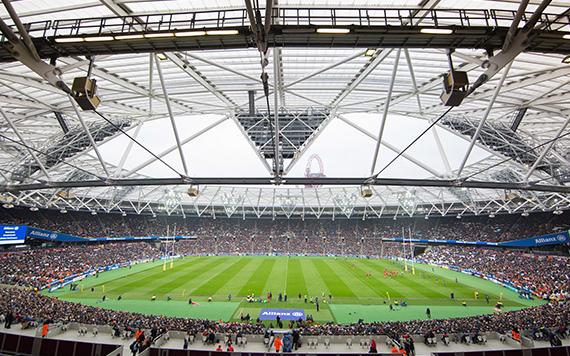 This weekend, with an international break in the Premier League calendar, London Stadium will play host to the biggest fixture in domestic rugby, Saracens v Harlequins on Saturday afternoon (kickoff 3pm).

Returning to the venue after making their London Stadium debut last season, Saracens currently occupy second place in the Gallagher Premiership table. Third-placed Harlequins are ten points behind their rivals, and both teams will be bolstered by the return of international players following the conclusion of this spring's six nations.

Sarries also beat Quins at the Stoop earlier this season in a narrow encounter, overcoming their rivals 25-20.

We'dÂ like to encourage all fans to arrive early for the fixture, and pay attention to the search regime in place for all events here at London Stadium to ensure the best possible experience when visiting the venue.

Ahead of the fixture, weâ€™ve compiled some handy information to help you make the most of your trip to London Stadium.

The last few tickets for the fixture remain on sale, direct from London-stadium.com. Secure your seats here...

London Stadium will be serving all draught beer inside the Stadium concourses in reusable cups, to help reduce our single-use plastic.
Â
Starting with this fixture, the trial will see all draught beer served across general admission areas at the venue in reusable plastic cups at no additional cost to fans.
Â
Fans can do their part on matchday by dropping their reusable plastic beer cups at the green collection points that will be on the concourse and in hospitality. These cups should not be put in regular bins around the Stadium.Â
Â
Fans will see 100 green cup collections points around the Stadium â€“ at least one per block â€“ with dedicated cup collectors wearing green â€˜Cup Collection Squadâ€™ t-shirts to help ensure all the reusable cups are collected.Â
Â

Kickoff between Saracens and Harlequins is set for 3pm, with London Stadium opening the turnstiles for supporters at 12.30pm.

Hospitality guests for the fixture can enjoy entry to London Stadium via Entrance B on Podium level from 12:30pm.

Make sure you donâ€™t miss a moment of the action and entertainment at London Stadium this year! Hereâ€™s whatâ€™s taking place on the day:
Â

After the game we expect all stations around London Stadium to be very busy, with crowd management systems to be in operations so we ask supporters to be patient as they head away from the ground.

If you are looking to avoid the queues why not head over to the fan zone where the bar will stay open till 19H00 and you can enjoy some live karaoke!

Please note that all other stadium bars will close at 18H00.

As well as experiencing the drama and excitement of Premiership Rugby, supporters visiting London Stadium for the fixture can enjoy a wider range of food and drink options than ever before.

Find out more about our new and improved offering hereâ€¦

After making quite the impression in our previous fixtures, we welcome back food with a Caribbean flavour, with Jerk Chicken, Caribbean Stew and more being offered by Grace Irie Eats at Kiosk 14 in Block 145.Â

The regime sees bag search checkpoints stationed directly adjacent to the bridges leading on to the stadium island, aÂ process has been used throughout London Stadiumâ€™s summer of concerts and world athletics and proved particularly successful in helping the flow of spectators to the stadium.

We will have an accessible Shuttle Bus Service will be in operation for disabled guests as normal.

All tickets can be collected from the Ticket Office at London Stadium, situated near bridge five.

Please report all lost or found property to the nearest member of staff at London Stadium.Â