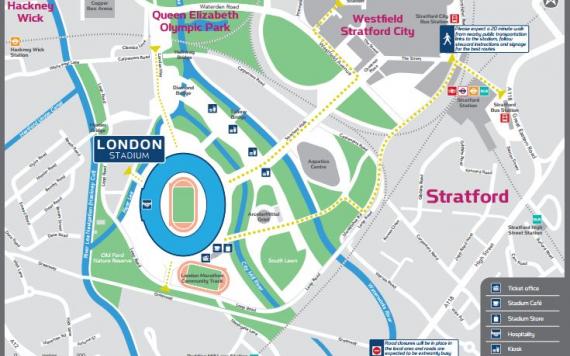 Supporters will enjoy a warm welcome when London Stadium plays host to West Hamâ€™s UEFA Europa League qualifier against NK Domzale on Thursday. Answers to our frequently asked questions will arm you with all the knowledge required to enjoy a smooth journey to and from London Stadium.

Whatâ€™s the best way to travel to London Stadium using public transport?
Stratford station is our recommended route for all supporters travelling to and from London Stadium given its capacity. Â Once at Stratford station stewards and signs will direct you to the Stadium. The roads between the station and stadiumÂ will be closed to traffic for an hour before kick-offÂ to help get you to the ground quickly and safely.Â You may not be able to take the walking route that you are used to on non-event days but rest assured that our stewarding team will direct you along the safest route to London Stadium.

Will I experience delays when I leave London Stadium?
Yes, some delays are inevitable when leaving London Stadium on West Ham matchdays. Weâ€™re working with a multi-agency team to monitor and improve ingress and egress for all supporters and we anticipate particularly busy periods immediately before and after the game. The roads to the station are closed after the game and stewards and signs are along the route to get you back to the station as quickly as possible. Supporters may experience short delays on their way out of London Stadium if there is a need to â€˜stop and holdâ€™ supporters along the route to ensure that foot traffic is safely managed. Â Transport for London monitor the flow into the station and may make periodic closures to ensure that the station capacity is not exceeded.Â Please be aware that smaller TfL stations around London Stadium are more likely to experience short-term closure as their capacity is significantly smaller than Stratford Station.

Will there be any road closures in place on matchdays?
Yes â€“ the Loop Road around the Stadium Island will be closed on matchdays. Montfichet Road will also be closed for an hour before and after the game and supporters will be diverted around the outside of Westfield Stratford on their way to Stratford Station.

Where can I visit for more information?Â
VisitÂ westhamunited.co.ukÂ andÂ london-stadium.comÂ for detailed information and event-specific updates. Follow @whufc_official and @londonstadium on Twitter for live matchday updates and travel information.

Will a shuttle bus service be provided for disabled supporters?
Yes, four shuttle buses will transport disabled, elderly, injured and pregnant supporters between the collection point at the end of platform 13 at Stratford Station to the community track just metres from London Stadium. The shuttle buses will operate pre-match from 5.45pm and post-match from the full-time whistle until demand subsides.

Are there any facilities in place for ambulant disabled supporters?
Yes â€“ rest areas and benches are located across the Stadium Island and Queen Elizabeth Olympic Park. Members of staff from the West Ham accessibility team will be on hand at London Stadium and on key routes to provide additional support.

Iâ€™m a blue badge holder â€“ will I be able to park at London Stadium?
West Ham United will offer spaces to 49 blue badge holders at every home game. To apply for a space, emailaccessibility@westhamunited.co.ukÂ . Print at home vouchers will be emailed to successful applicants at Thursdayâ€™s Europa League Qualifier against NK Domezale and Sundayâ€™s friendly against Juventus. Those who have successfully applied for seasonal blue badge parking will receive window hangers ahead of the Premier League encounter against Bournemouth on 21 August. The designated blue badge car park, known as Car Park 1A, is stewarded and located in the south west corner of the stadium. Six spaces will be allocated to blue badge holders from the visiting team at every match.