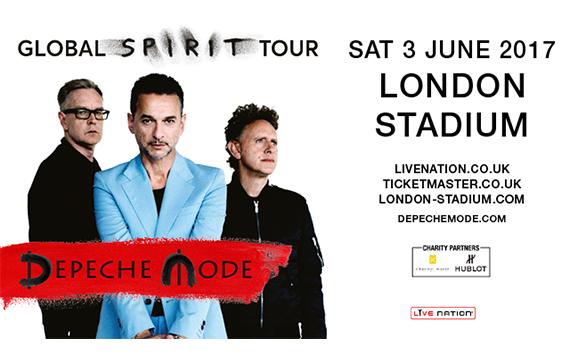 Tickets will go on general sale later this week with a further announcement to be made at London-Stadium.com .

â€œWeâ€™re delighted to be hosting Depeche Mode at London Stadium and their enduring reputation for exceptional live performances will be a welcome spectacle,â€ she said.

â€œThis concert will further enhance our reputation for providing a prestigious stage for leading acts who wish to perform in the UK and we are grateful to Depeche Mode and to Live Nation for choosing London Stadium.

â€œOur ambition is to maximise the use of London Stadium through a broad programme of events and adding concerts to our existing mix of Premier League Football, World Athletics and International Rugby League is a critical strand of our plans.

The European leg of the tour will see Dave Gahan, Martin Gore and Andy Fletcher play to more than 1.5 million fans in 32 cities in 21 countries across Europe.

The tour starts at will play fan-favourite venues including Parisâ€™ Stade de France, San Siro in Milan, and Berlinâ€™s Olympiastadion.

The band will play their first ever concerts at iconic venues including London Stadium, Otkritie Arena in Moscow, and Veltins-Arena in Gelsenkirchen, Germany.

The bandâ€™s last tour, the Delta Machine Tour, played to over 2.5 million fans at sold-out shows across Europe and North America and was one of 2013â€™s largest and best selling tours. On the Global Spirit Tour the band will continue their charity partnership with Swiss watch maker Hublot, raising money and awareness for Charity: Water toward their mission of providing safe drinking water to everyone in the world.