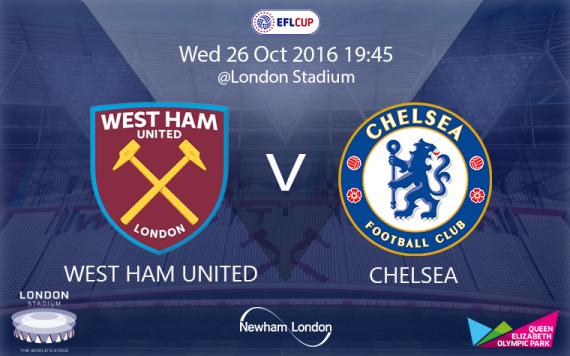 West Ham United and Chelsea supporters have been urged to arrive in good time ahead of Wednesday eveningâ€™s EFL Cup tie.Â

For the safety and security of all supporters there will be an enhanced body search policy at the turnstiles, so both home and away supporters are encouraged to arrive early to ensure quick access to the Stadium. The safety and security arrangements for both inside and outside London Stadium have been developed and agreed by all key stakeholders including the Club, London Stadium 185 and E20 Stadium LLP. The Metropolitan Police Service work closely with them and have confirmed they are satisfied with the safety arrangements.

The Metropolitan Police Service have confirmed for this fixture, and for every match going forward, that a tactical solution for the Airwave radio system will be in place at London Stadium. This will allow the safe deployment of officers into the stadium, if required, to deal with any crime or disorder, before a permanent Airwave radio solution is installed by February 2017.

Whilst there have been zero arrests made inside London Stadium this season, the Metropolitan Police Service have a proportionate policing plan that means they can deal with any crime and disorder inside the stadium, if required. It is worth noting that only four games at the Boleyn Ground last season had a police presence inside the ground. Police will also continue to provide an appropriate and visible presence outside London Stadium for the fixture, as there has been for every game this season.

A great deal of work has taken place behind the scenes to continue to improve the matchday experience for supporters. London Stadium 185, working with the Club, have significantly increased stewarding numbers and continue to ensure that all stewards hold, or are working towards an NVQ level two qualification in spectator safety. The stewarding at the Stadium is fully compliant with all safety requirements and all members of the stewarding response teams hold an SIA license.

Former Boleyn Ground stewards have also been deployed in areas that reflect their experience and expertise.

Ahead of the game, home and away supporters will mix freely around the stadium, however it is important for supporters to note that there will be post-match segregation.

We strongly advise supporters to listen out on the night as any changes to the plans for exiting the Stadium will be communicated during the match via the tannoy system, and to always follow stewardsâ€™ instructions to ensure a safe and swift exit.

The purchase of tickets for the fixture has been limited to supporters with a recorded West Ham United purchase history. Please do not come to the stadium if you do not have a valid match ticket as you will not be able to purchase one on the night and therefore will not be admitted to the ground.

Collaboration between West Ham United and London Stadium 185 is extensive, with colleagues routinely working together in pre-match planning meetings, inside the control room on matchdays and conducting CCTV reviews after every match.

The Club would like to thank our fantastic supporters for the way they have come and put their support behind the team so far this season. It is important to note that the overwhelming majority of supporters attending matches at London Stadium so far this season have behaved impeccably during their visits. The Club has been proud to welcome week-in-week-out our 10,000 under-16 season ticket holders and 25,000 supporters who attend as part of a family unit. It is imperative to the Club that London Stadium offers a safe and family-friendly environment for them and all supporters.

Therefore, we must restate that, in line with our zero tolerance policy, any West Ham United supporters found to be acting inappropriately will be identified and dealt with accordingly.

As a result of our highly efficient matchday operation and London Stadiumâ€™s state of the art Panomera CCTV system, which provides HD footage of all areas at London Stadium, 23 banning orders have been issued for offences ranging from drinking in view of the pitch to breaking the line of segregation.

The Club and London Stadium partners would like thank all supporters for sharing our commitment to deliver the best possible matchday experience for all.