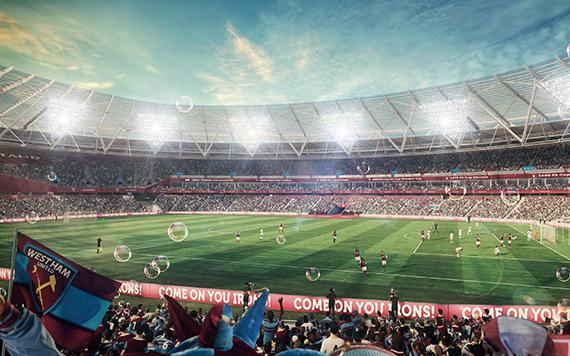 Three families of Hammersâ€™ guided tour of London Stadium took a turn for the unexpected, when they were greeted in the home dressing room by Pedro Obiang and Ashley Fletcher.

The Hammers pair hi-jacked the tour and showed the families down the tunnel and onto the technical areas at London Stadium.

For Fletcher, it presented an opportunity to strengthen their bond with the fans, and tried to put him in the kidsâ€™ shoes.

â€œItâ€™s great to see families down here, loving the new stadium and its a good thing to help families out.

â€œIâ€™d have been ecstatic, as hopefully they were too,â€ he said.Â

â€œWe just want to create an even better relationship between the club and the fans.

â€œWe understand how hard it can be financially to come and watch football but if we keep doing events like this, it can only help.â€

Fletcher swapped Old Trafford for London Stadium this summer, signing for the Hammers after beginning his career in the north west.

The England U20 international emphasised the importance of watching sport live in shaping his life and dream to become a professional footballer.

â€œItâ€™s was a massive part of growing up for me. I learnt football, really, by watching my heroes,â€ he said.

â€œWatching people on a Saturday afternoon for real, trying to copy them, and being able to emulate that now is a massive part of what makes me a footballer.

â€œWhen I went watching my heroes on a Saturday, I tried to emulate everything I saw them do. If they can take aspects of a playerâ€™s game into their games, even at a young age, it can only help them.â€

West Hamâ€™s next contest at London Stadium sees them host city rivals Arsenal on Saturday 3 December. With the Hammers now three unbeaten at the home ground, Fletcher is calling on the London Stadium support to continue to lift their side against fierce opposition.

â€œThe atmosphere has been electric,â€ he said.Â

â€œWhen Bubbles comes on itâ€™s fantastic, it gives the team a huge lift and the fans have been unbelievable. We need to keep them happy, and keep them coming to support us.

â€œUpton Park was a fortress and we want to make London Stadium a fortress. It has to be a difficult place to come to for every team and we need to make sure we do that.â€

Find out more about tours of London Stadium here...