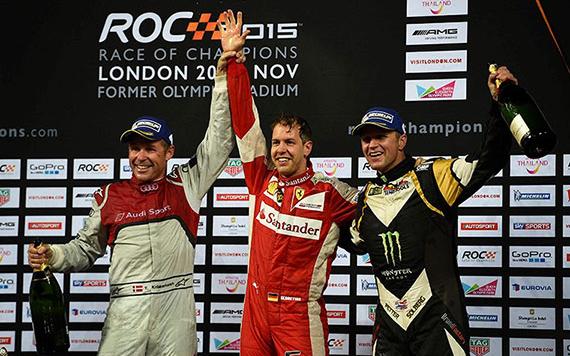 One Year On: Race Of Champions

Twelve months ago Sebastian Vettel was crowned Champions of Champions here at London Stadium, in the 2015 Race of Champions.

Vettel saw off nine-time Le Mans winner Tom Kristensen to take the title, the highlight of a day in which the four-time F1 world champion showed his class.

The eventual victor saw off Petter Solberg in the last 16 and cruised past Niko Hulkenberg in the quarter-finals, before being made to work harder to overcome David Coulthard in the semi-finals. Coulthard was the only driver to even take a leg from the German.

The Race of Champions saw motoring greats take over London Stadium, Felipe Massa and Jensen Button also taking to the track at an event which saw Susie Wolff close out her racing career.

"What the Race of Champions gives us is a lot of joy,â€ said Vettel after collecting his trophy.

â€œWhen we were kids starting to race, we did it for pure joy and this sort of event is a good reminder of that. When you close the visor, ultimately victory is still what drives you. But I've tried to win this so many times, today was more like a surprise.

"We all know this format is very difficult because no one gets much time in the cars so you need to find your rhythm quickly.Â

â€œToday I had the feeling I found it straightaway. It was very cold but it was a great atmosphere so thank you very much to everyone for coming to watch."

In the eventâ€™s Nationsâ€™ Cup, England emerged victorious, overcoming Germany in the final.