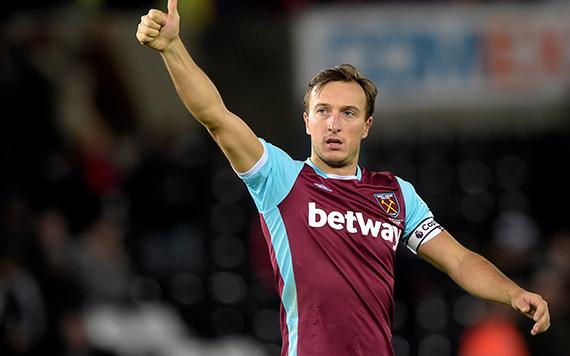 West Ham United captain Mark Noble has praised the atmosphere inside London Stadium, after his side picked up a vital three points against Swansea City in the Premier League on Saturday.

Cheikhou Kouyateâ€™s first half strike sealed the three points, and ended a run of five straight defeats, and Noble emphasised the value of the fansâ€™ backing in bringing that run to an end.

"That was probably the best atmosphere, for a game of that pressure against Swansea, that we have played in at this Stadium and I thought the fans were great and really helped,â€™ said the West Ham captain.

"We knew Arsenal was a tough place to go on Wednesday night and we played well in the first half and wanted to get a result there, so to lose and make it five losses in a row and then play like we did under a lot of pressure was brilliant.â€

While Kouyateâ€™s strike will take the headlines, and rightly so, the Hammers were indebted to a strong team performance, especially a defence which kept a vital clean sheet. From the energy of the teamâ€™s full backs, to the experience and last-ditch interceptions from the evergreen James Collins, Noble reserved extra praise for his backline.

"We had a lot of players who haven't played a lot of football - Ginge has played three games in a week now, Arthur Masuaku hasn't played a lot, nor has Sam Byram, so I'm just really, really proud of the lads,â€ he said.

"You never know what's going to happen. I've had that feeling in my belly the whole week where I just wanted the game to be over and done with and to sit on Saturday night and enjoy a win. Saturday was fantastic and it was just a pure relief."